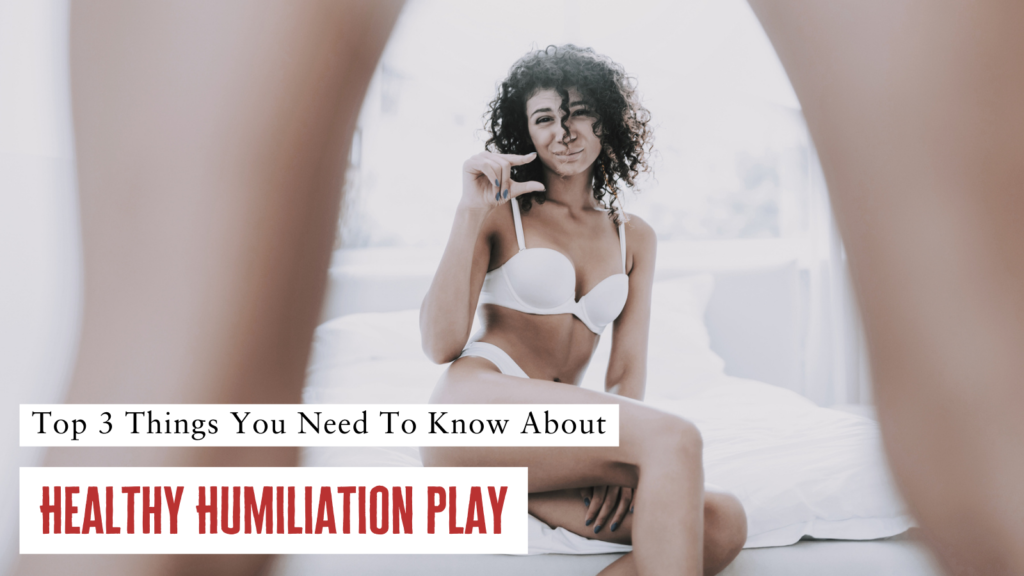 So from my abundant experience, here are the Top 3 Things You Need to Know About Healthy Humiliation Play.

1.) There are a lot of stereotypes and myths about humiliation play…and almost all of them are false.

The “kink community” is broadly diverse in so many ways: we all have different backgrounds, motivations, philosophies, skill levels, interests and – yes – prejudices.  In BDSM culture there’s a lot of talk about how open minded we all are, but that’s not always true in practice. We, too, are susceptible of falling into the trap of placing others beneath us to feel better about our own taboo interests.  We’re judgemental; it’s human nature.  Someone who’s into sissification thinks it’s perfectly acceptable to slip on a pink tutu, squeeze their broad hairy chest into a chiffon undershirt and cover encroaching male pattern baldness with a tiara – but think that those guys who smell feet are weird.  A kinkster who likes getting tied in intricate bondage watches someone getting whipped and is horrified, but the kinkster getting filleted with a single-tail doesn’t understand why anyone would waste their time with rope.

Of course this isn’t always the case (please don’t #NotAllKinksters me) but it can be a problem. On that kinky hierarchy, humiliation play is rarely very far up the ladder. There’s so many misunderstandings about the “type of person” who enjoys this kind of play and why. People make assumptions about everything from confidence level (“people who do thise have low self-esteem”) to psychological damage (“people who do that kind of thing are just damaged goods”).  But these assumptions don’t hold up under the light of my experience, the many conversations I’ve had, and the surveys I’ve done.  Until recently (ta-daa) there hasn’t been a lot of information out there, and so there was very little to fill those knowledge gaps.  People who enjoy their intense psychological drama with an edge of degradation have been left to their own devices – to deal with being stereotyped as a particular kind of person, and to try and create a language to express these desires.

When you learn to spank or flog, it’s easy to learn the motion and then make small adjustments to those standard actions for each individual scene. This goes for bondage as well: learn the knots then apply them in different combinations. But humiliation play is different; because it’s focused on achieving a specific emotional experience, it has to be completely personalized into order to work on someone. I talk about this a lot as  “kernel kink” : if each partner doesn’t understand the emotional goals/drives of the other, you’re likely to struggle through misunderstanding and end in frustration.

For example, if you try to humiliate someone by calling them worthless after they’ve just given you a half a dozen orgasms, that’s probably not going to ring true. And if you try to emasculate a man by dressing him in panties, and instead he feels liberated, neither of you is going to achieve the target emotional response.

With more physically focused play there are simple signs to look for to see if there’s anything is going wrong. And while there’s of course great variation between bodies, things are generally found in the same place on everyone. But with psychological play, where there may be NO external sign of distress, and the negative triggers are completely different for each partner, “checking in” becomes much more difficult, and all the more important.   It can also be hard to recover emotionally from a scene gone horribly wrong, even if there was no physical contact whatsoever.

Often part of the attraction is the vulnerability and exposure, but those very things are what can turn the play from really fun to deeply unfun fast enough to give you both psychological whiplash. By ‘messing around’ with those tender emotional spots there’s potential for lasting harm to another person – or even just to a relationship –  which can scare off kinksters from actually giving this play a try. Without a nuanced understanding of this kind of play it’s too easy to dive in the deep end too quickly or go rolling off an emotional cliff. Being armed with that understanding is critical to healthy play.