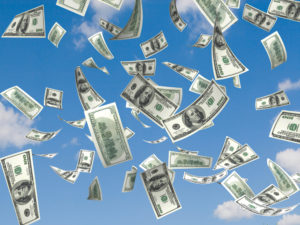 Yesterday I received this message in my Fetlife inbox.

“Is Ethical Financial Domination even possible?”

I’m always a bit surprised to hear this from fellow kinksters, though I shouldn’t be. Can’t that question be applied to everything we do? “Is ethical [your favorite kink here] even possible?  Someone who doesn’t understand how consent and context is critically relevant could very plausibly ask this about impact play or suspension bondage or dominance and submission of any kind.  But as experienced kinksters we understand these things – and yet people still ask this question about financial domination.

Money and sexuality are two of the biggest taboos in society.  And so what do you get when you combine them in the context of a kink relationship?  An incredibly misunderstood way to play; a remarkably versatile tool of (consensual) power, submission, domination, sacrifice, humiliation… and more!

So in a community of self-proclaimed rebels and rule-breakers, why does the intersection of kink and finance draw such a squeamish response?  Money is a tool. It can be a tool of domination or a tool of submission. It can be a practical component of a relationship or part of a negotiated dynamic of many kinds. Money can be used to humiliate or empower, it can be a sacrifice or a tangible way of caring for someone. It can be any of these things. It can be all of these things.

A few years ago I taught a financial domination class at Dark Odyssey Summer Camp. Only three women showed up, which wasn’t surprising because it’s a lifestyle event and most kinksters think of financial play as sleazy and beneath them. We ended up having a really incredible conversation about the diverse ways of using money in their D/s relationships. The first woman had been thinking about becoming a professional dominatrix for a few years and wanted to let go of the misinformation and stereotypes she’d heard and learn how to start incorporating money while still feeling good about it.   Another woman had her male dominant “force” her to let him pay her bills. The third used financial domination to reinforce her submissives devotion by having them fund improvements to her home. Important though: the money here was part of the power exchange. In this case, it was not payment for kinky service; it was kinky service.

Of course, it doesn’t help that #findom has become an online world populated with visibly unethical folks who push people into bankruptcy, demand the emptying of college and savings accounts, disrespect to spouses, “forced intoxication” and who threaten peoples’ livelihoods in the name of tribute.    This is not power exchange; it is power abuse. If a financial dom is demanding a sacrifice more than what was originally consented to entirely for their own gain, that slides into unethical behavior. And those unethical assholes are spoiling a great opportunity for the rest of us.

Though to clarify, as a Risk Aware Consensual Kink player,  I don’t think that “forced” intoxication is an impossible fantasy to fulfill. But there’s no way in hell that the majority of folks pushing this play online have had a nuanced conversation about consent without exploitation with the people they’re playing with. It’s ok if your fantasy is to be exploited, but that should still be an active conversation.

Like my work with erotic humiliation and consensual psychological torment, I’d like to open up more kinksters to the thrill of using money to satisfy a variety of sexy uses.  Playing with social taboos and psychological triggers touches all my kinky buttons. The ways that ProDomme’s use money in their client relationships might seem more obvious to some, but it’s possible to explore in a lifestyle relationship too.  Not all financial domination is about blackmail or the “threat” of imminent bankruptcy – in fact far from it. It can be used short term (bring me a perfect coffee every morning or buy me a toy for the session we’re going to have) or it can be long-term (fund my start-up or invest in my 401k).  But however it’s used, if it can be used to induce (consensual) discomfort in my play partner, then sign me up!

I like to think of financial domination as having three broad categories that still leave a range of options depending on your interests, limits and the nature of your relationship. These elements (along with a couple of other influences) all come together to create a sweet spot of eroticisim you might be currently missing out on.