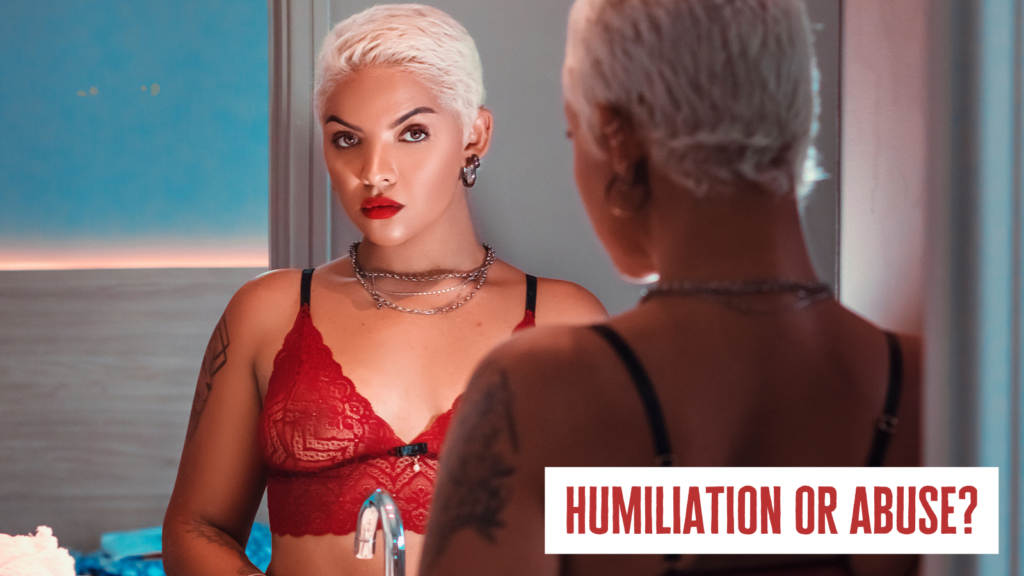 Embarrassment and humiliation are simply different levels of the psychological experience.

First, the official definitions, from the oh-so-deep archives on Wikipedia:

1)      Embarrassment is an emotional state of intense discomfort with oneself, experienced upon having a socially unacceptable act or condition witnessed by or revealed to others.

2)      Humiliation is the abasement of pride, which creates mortification or leads to a state of being humbled or reduced to lowliness or submission. It is an emotion felt by a person whose social status has just decreased.

Consent & Intent, those are the key differences.

When someone is abusive, the intent is to tear the other person down, to shame them into feeling genuinely, deeply bad about themselves. The feelings that come to mind are: oppression, negative, hateful, malicious and hurtful. Abuse comes from a need to feel bigger or stronger than the other person, to put others down is the only way to feel better about themselves. Abuse stems from insecurities and there are big red flags that you can look for, such as:

1)      First and foremost, if there’s been no negotiation, no expression of desire and no consent then it is abuse.

2)      If the experience feels violent and leaves you feeling negative about yourself.

3)      If you negotiated this type of play within a consensual scene, but your boundaries aren’t being respected.

4)      If the other person is disrespectful, rude, hurtful or outright vicious on a regular basis with no concern about how it makes you feel.

5)      Memories of the experience continue to make you feel sad or upset.

Watch out for red flags and be acutely aware of how the experience makes you feel. It can be helpful to have an outside opinion to keep an open perspective, but it’s important that the person is kinky (or understands kink) so those superficial assumptions aren’t made. Be honest with yourself about the motivations of your partner and whether you’ve negotiated this kind of interaction.

So just don’t assume that all humiliation is abusive but understand that it can be used as a structure for abuse. The most important part is how you FEEL after the experience. Was it sexy and embarrassing? Or was it shameful and violent?

Posted in News and tagged abuse, consent, healthy, what is