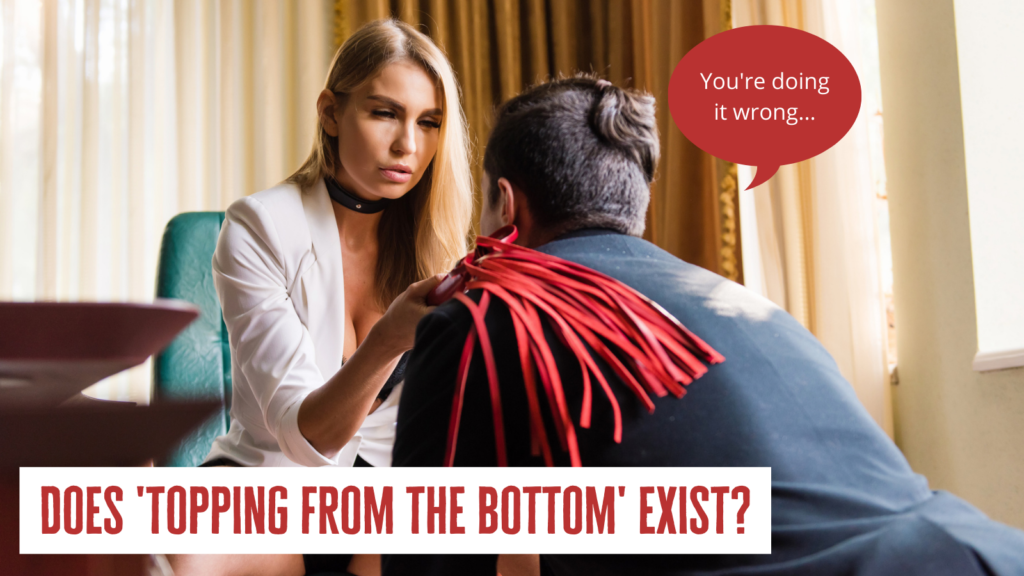 And sometimes that’s true. I recently received (yet another) email from (yet another) submissive (after very little actual interaction, and no established relationship) sharing his fantasy. This was prefaced with the absurd idea that it would delight me first thing in the morning to hear all about how I can bring his fantasies to life. There was no mention of anything that would please me specifically as the person I am, not just a vessel for his desires.

That’s obnoxious and doesn’t improve his odds of earning any real playtime.

But I still think this oft-repeated phantom that haunts so many dominants and submissives has done more harm than good.

The real problem is when any and all communication, feedback, or unsolicited fantasies (within a relationship) get lumped in with selfish and/or manipulative attempts at getting a dominant to “perform.” This is the nuance that I’ve seen is lost when new, or even long-time kinksters profess a unilateral disdain for ‘topping from the bottom’ when what they might be talking about is “submissive expressing desires and needs.”

Concern about ‘topping from the bottom’ has created a lot more negative experiences for kinksters than saved anybody from them.

Over the years, I’ve seen both sides of the D/s dynamic express the reasons ‘topping from the bottom’ should be avoided at all costs.

All of that is fine within a fantasy context, but healthy kink has to be rooted in reality…and that includes plenty of communication from both sides. If either partner lets fear of ‘topping from the bottom’ stop communication from happening, there’s bound to be trouble.

When it comes to ‘topping from the bottom’ the two critical elements are the Intention and Delivery.

A submissive HAS to be able to communicate to the dominant when it comes to their desires, needs and fantasies. All kink is deeply personal, and when it comes to psychological play and humiliation, it’s even more so.

The difference is the energy with which those things are communicated.

If a submissive shares their fantasies with impatient expectation, or an expectation of perfection, then that would be what I consider the traditional concept of ‘topping from the bottom’ and it’s not helpful.

However, if a submissive shares their fantasies, needs, and desires in the spirit of giving their dominant information to be used at the dominants discretion, then that is entirely appropriate and is often incredibly useful.

If a dominant isn’t willing to listen to their submissive the chance of a problem occurring skyrockets… everything from unsatisfactory scenes to accidental consent violations to abusive situations and relationships.

It’s all well and good to do the whole “I AM AN ALL-KNOWING DOMINANT” thing, as long as that thing doesn’t stop your submissive from being able to communicate with you like you’re both actual human beings.

If you’re a submissive, look at your intentions when sharing your fantasies and feedback. Communication shouldn’t be an issue but your style, delivery and timing might be. No dominant wants to be scolded by their submissive (unless there’s an agreed upon brat dynamic) and no one enjoys being whined at or having to watch someone pout.

I recommend that you watch the tone of voice you use if you’re talking in person with your dominant. Plenty of useful conversations have been derailed by petulance or the tone of disappointment.

When you share your fantasies as a way for your dominant to understand your psyche, then you’re arming them with the most useful kink tool of all, personalized information. However, if you expect your dominant to simply play out your fantasies then unless you have a Service Top* that’s likely to end up in frustration for both of you.

Find a way to communicate that supports your power dynamic

It doesn’t have to turn into a demand-free-for-all. There are options for submissives to communicate which can help ease the feeling that sharing = demanding.

*Plenty of people enjoy playing with dominant energy in a scene, but don’t at all mind getting information that’s more along the line of instructions and might even prefer it. This is what might be called “Service Topping,” or in this case “Service Dominance” which is dominance ‘in service’ to the submissives desires/needs. Yes, this is a real thing, and yes this is still “real” domination.

What do you think? Does ‘topping from the bottom’ exist? Have you had any experiences with it?

Posted in News and tagged communication, dominance, submission, teamwork, topping from the bottom